May is Mental Health Awareness Month! 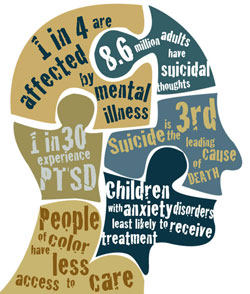 1 in 4 people will suffer from some form of mental illness in any given year.

Depression and anxiety remain two of the most common mental disorders worldwide. Acupuncture is becoming more recognized as treatment to help support these disorders. When factors like injury, stress, improper nutrition or a change in environment disrupt the natural flow of the body’s energy, health issues may arise. Acupuncture stimulates the release of oxytocin (the feel good hormone), a hormone that regulates the parasympathetic nervous system.

Acupuncture can also just start the body’s natural ability to heal itself or stimulate the part of the brain that controls emotions, including anxiety and depression. All of these can help people feel relaxed and more balanced.

Variations in mood are part of a life. Feelings of sadness or despair are typically temporary and should not last longer than a few days. Depression is a more serious mental illness that is usually diagnosed when this negative state of mind continues for two weeks or longer.

Some symptoms of Depression may include:

Symptoms in Children May include:

The typical treatment for depression is a two part program that includes some form of talk therapy which can be extremely helpful patients as well as the use of antidepressants. Antidepressants usually work by normalizing naturally occurring brain chemicals particularly the neurotransmitters serotonin and norepinephrine. Scientists understand that these chemicals are in some way responsible for regulating mood but they are still unsure of the exact mechanism that makes this work.

Antidepressants were developed to alter chemicals in the brain, yet researches are still unclear as to the mechanism of these chemicals or why and how antidepressant drugs work. Even worse, the long-term effects of the most popular classes of antidepressants.

The most common side effects of antidepressants are headaches, nausea, insomnia, agitation and sexual problems.

Acupuncture is a safe, effective and drug free way to help treat depression. It has been used in China for thousands of years, but has only recently become mainstream in the US as more western people are open to the technique and effectiveness of Acupuncture.

Acupuncture works by stimulating the nerves that transmit impulses to the hypothalamic-pituitary system at the base of the brain. The glands that are located there are responsible for releasing neurotransmitters and endorphins (natural pain-killing hormones). The chemicals released not only relax the whole body, but it may also regulate serotonin in the brain.

We encourage you to spread awareness about depression and mental health during May!