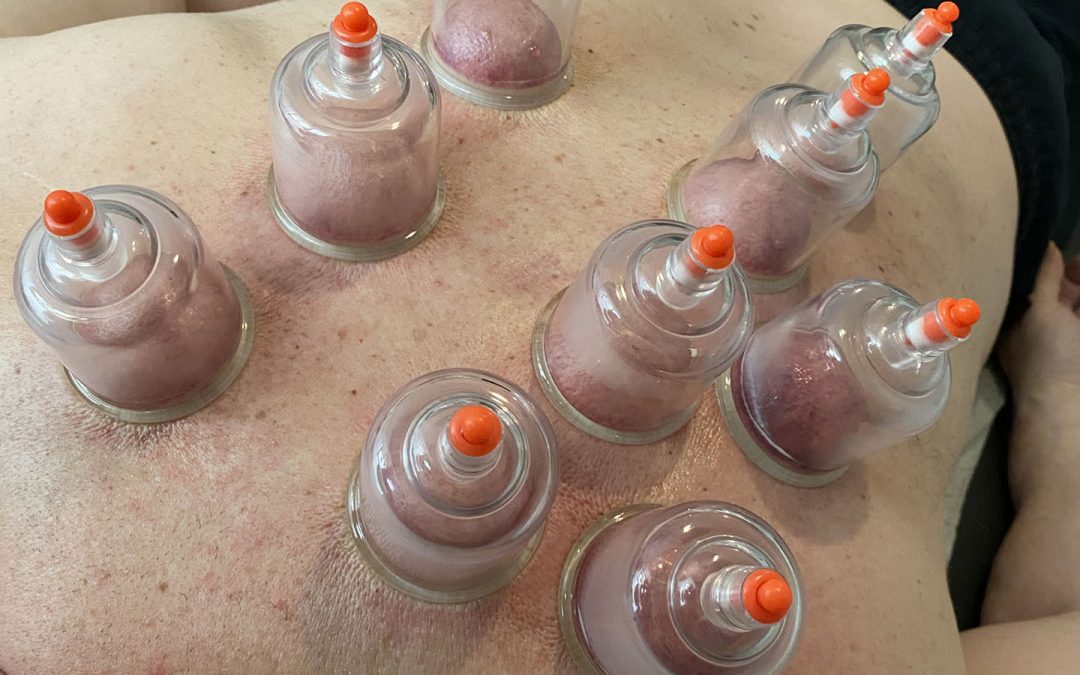 Though it has become trendy now, Cupping Therapy has been around for thousands of years.  It dates as far back as Ancient Egypt in the 1500’s BC and was used in Middle Eastern and Chinese cultures.

Cupping involves placing bamboo, glass or plastic jars no the skin and creating a vacuum by suctioning out the air.  The underlying tissue is raised up, or sucked into the cup.  The purpose for cupping is to increase circulation (blood flow), and pull out toxins that stagnate in your body’s tissues.  The negative pressure formed through cupping also loosens tight muscles, relieves neck and back pain, helps with fatigue, anxiety, headaches, and even cellulite and skin conditions.

According to the British Cupping Society;  The sedation of the nervous system is great for treating High Blood Pressure.  They also note cupping helps with Rheumatoid conditions, arthritis and fibromyalgia.

There is an old Chinese medical mantra:

This states that pain is resulted from congestion, stagnation and the blockage of Qi (pronounced “chee”) or vital energy, vital fluids, lymph, phlegm, and blood.  If pain is the essence of disease, then suffering is a result of obstructed or irregular flow in the body.  Chinese therapy cupping is therefore a method of breaking up the blockage to restore the body’s natural flow of energy. 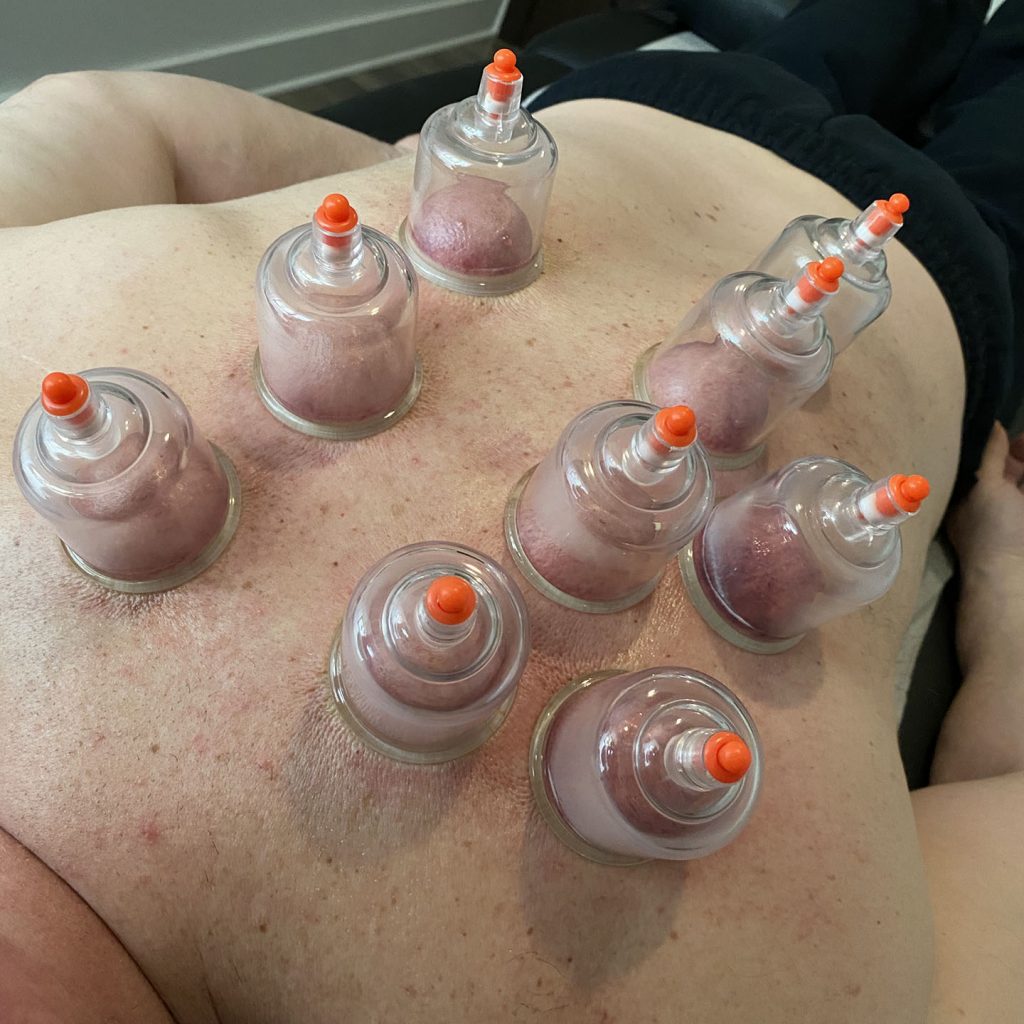 There is usually a tight sensation around the cup area.  Most of the time, this sensation is soothing and relaxing.   Based on your comfort level and the practitioner’s assessment of the problem, the cups may be moved around the area, or left in place.  The cups can remain on your body for a short period, or a longer amount of time. Cupping is like the inverse of massage. Instead of pushing the muscles, they are pulled, causing a relaxing sensation.  Every treatment is unique to you and your condition, and how your condition is responding on a particular day.  The most common area for cupping is on the back.  However cupping works well on other fleshy sections of the body.  If you watched the 2016 Summer Olympics in Brazil, you saw Michael Phelps with darkened circles on his shoulder area.  This was cupping. 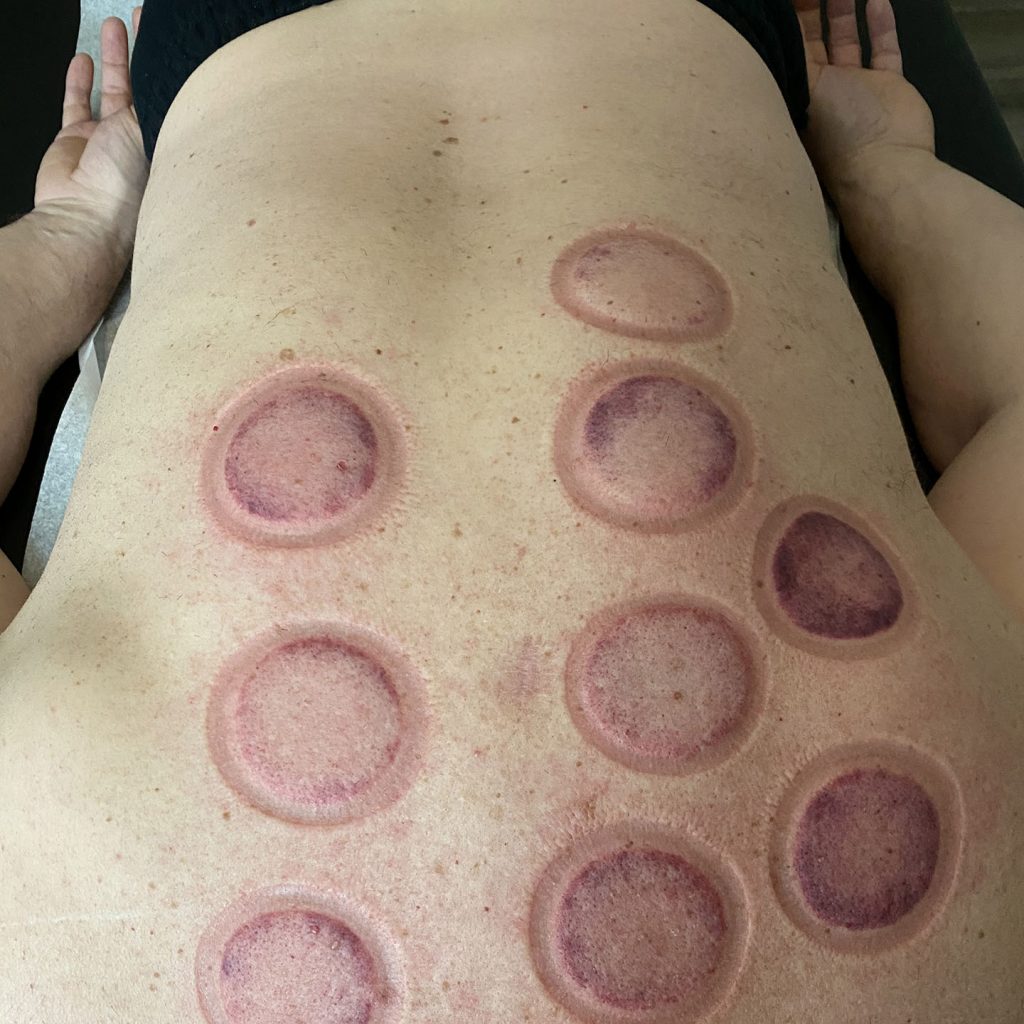 Cupping will cause the skin to temporarily turn blue, red or purple.  This is especially present if there’s an injury or energetic blockage under the area being cupped.  This discoloration of the skin can last for a few days to a couple of weeks.  However it is rarely painful.  When the marks are gone, the cupping procedure can be repeated again until the ailment or condition is resolved.

Cupping may be trendy with the Hollywood scene, but athletes are taking it seriously to reduce pain and improve their game.  We spoke of Michael Phelps recently using cupping, but another Olympian, Chinese swimmer Wang Qun proudly showed off her cupping circles during the 2008 Beijing Games.  Tennis champ Andy Murry used cupping to help with his back injuries.  And a large number of New York Mets players use cupping to improve their game.  But most importantly, Cupping is beneficial for everyone.

Cupping has also been shown to help with digestion.  This includes increasing metabolism, reducing constipation, and improving appetite.

A report, published in the Journal of Traditional and Complementary Medicine in 2015, noted that Cupping could help with acne, herpes zoster, and pain management.

Our Acupuncturists, at Monmouth Pain And Rehab are well versed with cupping.  Many patients report positive benefits after a session, including a reduction of both pain, and stress.  Our Acupuncturists can incorporate traditional acupuncture with the cupping therapy.

It should be noted that cupping therapy isn’t to be used on patients who easily bleed and/or can’t stop bleeding.  Also patients who have ulcers or open wounds.  Pregnant women should be cupped with extreme caution and avoid their abdomen or low back.