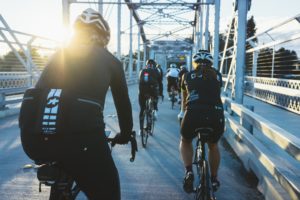 Bike Your Way to Better Health

So you’ve decided that now is the time to become healthier and physically fit. It’s a big decision, and it’s important to know your options in accomplishing your mission. One way is to bicycle. The positive effects of cycling are well established with studies that go back decades, and the benefits go beyond just “staying in shape”.

According to Reuters Health in the journal Circulation, Anders Grontved, a researcher at the University of Southern Denmark in Odense studied the effects of bicycling for 45,000 Danish adults over 20 years. The study concluded that “biking either for recreation or as a way to commute is also great for heart health”.

Grontved discovered that bike riders had 11-18 % fewer heart attacks than those who did not ride a bike. Biking as little as an hour a week provided some protection against coronary artery disease. Cyclists who ride for an hour a day have an 18% lower risk of all-cause mortality than non-cyclists. For those who ride an hour and a half or more, the benefit increases to 28%, according to a 2000 study in the Journal of the American Medical Association. Luckily, the results suggest it’s never too late to start.

Riding your bike is a great way to get in shape and stay in shape. The benefits of physical fitness go beyond looking better and improving your fitness abilities. Another study published in the Journal of the American Medical Association recently looked at nearly 14,000 men and concluded that those with a higher fitness level as they approached middle age were at a lower risk for lung and colorectal cancer.

According to a study from Bristol University, exercise also helps to reduce your risk of colon cancer. Evidence from 35 of the 48 studies reviewed on bowel cancer proved that “regular exercise could cut the risk of developing the disease by 40-50%.” Lead researcher, Professor Ken Fox from the Department of Exercise and Health Sciences at the University of Bristol, says, “Physical activity is a crucial component of a healthy lifestyle and we have found a growing body of evidence that indicates its importance in keeping cancer at bay.”

According to cyclingweekly.com, bike riding can help with insomnia. Researchers at the University of Georgia studied men and women ages 20 to 85 over a period of 35 years, and found that a drop in fitness of 2% for men and 4% for women resulted in sleep problems.

Dr. Rodney Dishman explained, “The steepest decline in cardiorespiratory fitness happens between ages 40 and 60. This is also when problems of sleep duration and quality are elevated.” Scientists suggested that the link between fitness and sleep could be due to exercise causing a reduction in anxiety, and thus improving the ability to sleep. Exercise also protects against weight gain, which is another cause of sleep dysfunction.

Furthermore, a study from Stanford University concluded that participants who normally had trouble sleeping could fall asleep in half their normal time after bicycling 20 to 30 minutes each day.

According to virsilas.com, researchers from the University of Illinois found that “a ﬁve percent improvement in cardio-respiratory ﬁtness from cycling led to an improvement of up to 15 percent in mental tests.” Bicycling can help the brain create new cells in the hippocampus, which is responsible for memory. “[Cycling] boosts blood ﬂow and oxygen to the brain, which ﬁres and regenerates receptors, explaining how exercise helps ward off Alzheimer’s,” says the study’s author, Professor Arthur Kramer.

As you can see, by starting or continuing with an exercise program like regular bicycling you will receive multiple benefits for your efforts. To quote the late great Freddie Mercury, “…get on your bikes and ride!”

If you’ve had some type of injury or pain and are unsure of your ability to bike, the physical therapy team at Monmouth Pain & Rehabilitation can help you discover exercises that suit you and your body. Call 732-345-1377 for more information.