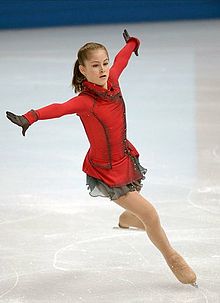 Competitive figure skating has always been too stressful for me to watch.  Figure skating was a scary movie where I would close my eyes just

before something bad happened.  The anticipation of the lift, spins, airtime, and then to have to land on those narrow blades without a glitch – was I the only one holding my breath??

The idea of all of those hours, days, months and years of practice just to get to that moment where perfection is your only option. Ugh!  It’s all too much!!!  And with the spotlight on you, the world watching, in front of the President of your country, you alone on the ice – I can still draw up some anxiety at the thought of it.

Well, I got through it.  Not only was I inspired while watching the 15 year old Julia Lipnitskaia lead her Russian team to a Gold medal at the Winter Olympics in Sochi, but I also realized that there was something else going on behind the scenes of all of that hard work and discipline, something that shines from deep inside.

Julia’s skating was the summation of every positive affirmation and quotation I have ever read on courage, integrity, confidence, fearlessness, poise, and the list goes on and on.  I realized that her expression of life through movement on those skates that night was as close to perfection as anything could be.

So, what does it teach?  The obvious lesson here is that if you work hard with discipline and diligence you can achieve greatness.  Additionally, there was something else in that performance which I believe propelled her to her greatness.  There was a sense of humility.

Julia’s moved with grace and beauty.  I believe that what really captured us was the humility with which she did it.  You can argue that humility is a sense of meekness and Julia did not express that at all.  I am suggesting that her presence that night on the ice was larger than any 5 foot 2 inch 15-year old could be.  There in that moment, where she was the center of the attention of the world, she allowed her humility to shine.  And it was because of this underlying sense humility, along with her effort and talent and timing, that she was able to inspire the world.

If we can get out of our own heads, and simply be present as I believe Julia did that night in Sochi, we have the opportunity to achieve greatness in whatever capacity that may be, great or small.  This is the lesson I learned that night watching that little girl move.