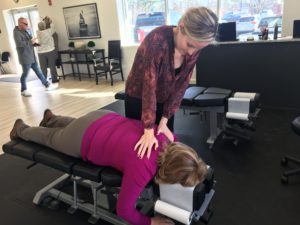 Dr. Mindy Drake grew up near Des Moines, Iowa. She was very active in sports growing up, and played basketball, softball and tennis. She attended the University of Iowa, where she received her B.S. degree in Integrative Physiology in 2003. After graduation, she briefly researched the physiology of aging, and then decided to pursue a career in health care as a chiropractor after she spent time shadowing her uncle, who is also a chiropractor. She attended Palmer College of Chiropractic in Davenport, Iowa and graduated in 2008. She practiced in Santa Monica, California for several years in a Blair Upper Cervical Chiropractic practice, and then eventually moved into an integrative medicine facility in Brentwood, CA where she learned about the applications of laser therapy for accelerated healing, and also began to incorporate nutrition into her wellness practice model.

Dr. Drake moved to New Jersey in 2015 and has been working with the Monmouth Pain and Rehab team since the beginning of 2018. She enjoys reading, hiking, travel, and volunteering for the non-profit, Spring Reins of Life.