Rob Burbella moved to Monmouth County in 2014 and began practicing Physical Therapy at Monmouth Pain and Rehabilitation in early 2017. He graduated from the City University of New York College of Staten Island Physical Therapy program in 1998 and went on to specialize in Orthopedics by earning a Certified Integrated Manual Therapy from Great Lakes Seminars and earned a Certification in Spinal Manipulative Therapy from the American Academy of Manipulative Therapy. He has spent 19 years treating patients in outpatient orthopedics and home care settings.

He was first introduced to Physical Therapy as a 1st lieutenant in the NJ Army National Guard while watching a soldier learn to walk with a prosthesis on his leg for the first time. “I saw the Physical Therapist train the soldier to walk with his new leg. I was very impressed by the therapist’s ability to encourage and empower the young amputee. I was very inspired by the therapist’s knowledge and by his measure of caring.”

Rob enjoys an active lifestyle including bicycling, SCUBA diving, and playing music with his band. 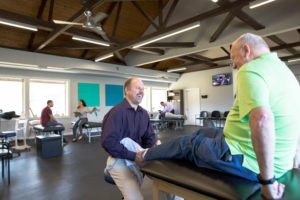