Stepping Into the Arena 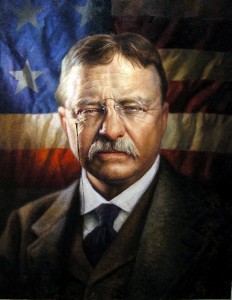 This is one of my favorite quotations ever and has always reminded me how proud I am to be an American.  I had this one thumb-tacked to my wall in college for years:

Excerpt from a 35 page speech given by President Theodore Roosevelt in 1910 in France titled “The Man in the Arena”:

“It is not the critic who counts; not the man who points out how the strong man stumbles, or where the doer of deeds could have done them better. The credit belongs to the man who is actually in the arena, whose face is marred by dust and sweat and blood; who strives valiantly; who errs, who comes short again and again, because there is no effort without error and shortcoming; but who does actually strive to do the deeds; who knows great enthusiasms, the great devotions; who spends himself in a worthy cause; who at the best knows in the end the triumph of high achievement, and who at the worst, if he fails, at least fails while daring greatly, so that his place shall never be with those cold and timid souls who neither know victory nor defeat.”

Interestingly, the great Nelson Mandela also gave a copy of this speech to François Pienaar, captain of the South African rugby team, before the start of the 1995 Rugby World Cup,in which the South African side eventually defeated the heavily favored New Zealand men’s national rugby union team.

Every day each of us steps into the arena of life. We sweat, we fight, we fail over and over again.  This is life. As some would say, “This is what we signed up for.” And for what? This is the great metaphor for the human experience itself.  It is here in the arena that we have the opportunity to cultivate and develop ourselves.  It is here in the arena of life that we can serve others.  How you chose to be when you are in the arena day in and day out will determine the level of peace you carry in your heart and the happiness you express outward to the world.

I witness this first-hand at Monmouth Pain each and every day. The road to better health and recovery from pain, injuries, and ailments can be a tough one. It can be grueling and require commitment, dedication, and a true desire to feel better. There are low points and times of true exhaustion. I have witnessed a number of patients at their lowest when going through treatment and I have watched those same patients continue to move forward and fight their way to recovery. Success comes very sweet for those that stick with it and accomplish what they set out to do.

Its all sounds so simple, but no one ever promised us it was going to be easy.